I hope everyone enjoyed Christmas yesterday and spent time enjoying their families. To me Christmas is a time to rest and spend time with my family. This post is mostly a recap of our Christmas fun.

Last year we started a new tradition of looking through our toys and giving away a few that are no longer played with. Lucian and Fiona looked through their toys and put a box together to give away. This was a very hard task for our 5 and 3 year old. We had a long discussion about sharing and giving toys to kids who don’t have any. Our box only had a few toys in it to give away but its more about the concept than the amount of toys leaving the house.

We spent Christmas Eve at my sister’s house for our family’s Christmas celebration. The kids made ornaments, frosted cookies for Santa, and went sledding before we all had dinner together. The kids played one organized game before opening presents. At Thanksgiving we had each child draw a name for who they would be getting a present for at Christmas. It was our first year of drawing names and it worked quite well. My sisters and I also drew names for what Holidays we would be hosting during this next year. I managed to draw Thanksgiving again. The kids had a great time but were very tired when it was time to go. Spending Christmas Eve with my sisters, parents, grandma, and nieces and nephews is one of the best parts of Christmas for me, that and Alecia’s hot chocolate!

Our day started later than usual because the kids slept in after too much fun playing with their cousins. When we were all awake we opened our stockings then took turns opening our presents. Lucian is old enough to shop for others now so he was very happy when we unwrapped presents from him. I think it is important for him to learn to

give gifts and think of what a specific person would like. Lucian received a farm set and Fiona a stable that we set up in our playroom/attic space upstairs where Penelope can’t destroy them and try to eat the small parts. I would say that Fiona’s favorite is a new play-dough set with dough scissors that Lucian picked for her and Lucian’s is a harmonica. He wanted me to play with him so I dug our my Clarinet, which I haven’t played in about 2 years, and Fiona strummed the guitar on the floor while Penelope used it as a drum. We had our own little jam session which was really fun. The kids played with their new toys, we played with each other, everyone took a nice nap, and we had dinner with Grandma “da” so we had a great day.

Even though it was a holiday chores still had to be done. The weather has been temperate at about 30 to 35 degrees so the goats have been going outside everyday to enjoy the fresh air and sunshine. The chickens are even starting to venture out into the light. They don’t appreciate all the snow and while I should shovel their yard out a bit I have focused on walkways and the porch. So far we have accumulated approximately 2 feet of snow so I’m limiting where I shovel.

Our new horse, Melody, had a bit of a scare yesterday. All the snow whooshed off the lean-to roof and scared her. She went running and squealing so Jack had to run and go check on her. She was still freaked out when I fed them their grain and I had to coax her back into the lean-to. Fiona likes to feed Jack out of her hand so she kept him occupied while I convinced Melody it was safe to come inside.

Not only did we have a relaxing day at home we also worked on hauling a bit of firewood into the shed. Doing firewood is still one of Lucian’s favorite things to do so he was happy as a lark loading wood onto the trailer and watching the wood-splitter split the big logs. 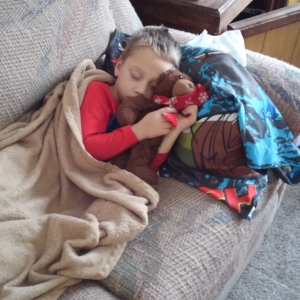 We had a great Christmas Day spending time with each other while still accomplishing a few necessary tasks and we all took a nap. I hope everyone had a day just as lovely!

Going on a road trip can be a fun adventure but a road trip with little kids can be more challenging. Planning a successful trip (by successful I mean with the least amount of crying, complaining, and fighting) takes a bit more time than just throwing things into the car and leaving.

Knowing how long your trip is and when your kids take a nap is an essential. Sleeping through a portion of the trip will make it seem shorter to them and reduce the boredom of being confined to a small space for hours.

For example, tomorrow we are leaving on the 5 hour drive to visit relatives in Minnesota. The plan is to leave around 9 because Penelope usually takes a morning nap at 10ish. We will stop for lunch around noon and Fiona naps just after lunch. In theory the girls will nap on the drive and will be well rested and in good moods by the time we get there.

This is my list of essentials for in the car:

When the crying starts get ready to sing a few songs to distract the kids from their troubles. Remember a few:

If the weather is nice stop for a bit and walk around. Being cramped in a car for a long time is really hard on little kids so getting out and taking a short walk will help.

The simple truth with children is that snacks make everything better so be sure to pack enough.

The weather outside is frightful! Moving closer to Christmas we have our first wave of below zero weather. The high is -10 and tomorrow looks to be about the same. Even though it has been getting steadily colder the temperature took a major dive last night.

I know complaining about the weather is the oldest complaint there is but on a farm chores become a little more difficult when it is this cold.

A Few Changes While its Colder Outside Than it is in My Freezer:

The other main hurdle to temperatures this cold is that Everything Breaks! Keeping cars, trucks, and water pumps running while it is this cold is a chore itself.

While perusing Pinterest I discovered a hobby farming hack that has been useful. Placing a gallon jug filled with 1/4 to 1/2 cup salt and about a cup of water in a water tank will help keep the ice out of the tank. I have noticed that when it is this cold there is no stopping the ice but it will reduce the amount. Also one jug works for smaller tanks but a larger tank would need two or more to reduce the exposed surface area of the water. I’m going put the salt/water mix in a water bottle to try to keep ice out of the small buckets I use for the goats in the barn. I hope it works because soon it will be consistently this cold (Hello January 😦 and 5 gallon buckets break when they are too full of ice.

While the below zero weather lasts remember to bundle up and stay safe!

Christmas is just under three weeks away! How did that happen?

Homestead products I have made this year:

Photo by Pixabay on Pexels.com

I would need awfully big baskets if I were to put a sampling of everything I made this year into each basket. I pick and choose what items to put into each basket depending on whom will receive it.

What to Put Into a Basket:

Filling baskets with homemade goodies is a great way to give gifts that are both useful and thoughtful.

I enjoy working at our local bookstore in town and I also love the extra perks that go with working there. What are my perks? Books, of course. I am able to pick though a variety of slightly damaged books or magazines which make great additions to my Christmas baskets.

Making Christmas baskets takes more time than buying a simple present and wrapping it but I believe the time I put into them makes the gift better. I enjoy receiving gifts I will use rather than items that are lovely but essentially useless, so I make gifts that will be used. I have always enjoyed making anything from bread to scarves so I put my skills to good use and share with my family what our little hobby farm has produced through the year.