Happy Easter! To me the coming of Easter also signals the coming of spring. This spring has been a little off to say the least. Normal seasonal events have changed and evolved but we are adjusting. The kids still enjoyed coloring eggs and hunting for their Easter baskets exactly like they have in previous years. Rather than having a large family celebration and egg hunt we will be having a small egg hunt in our own yard this year. 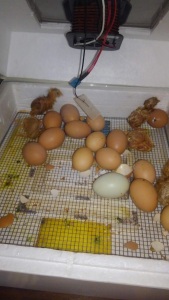 I usually hatch chicks with the 4th grade but this year due to our home-boundness (I may have made up that word) we are hatching chicks at home. It has been fun to share the incubation process with my children, and nieces and nephews. They have followed along with daily growth, listened to various chick stories, and made scientific hypothesis as to how many chicks would hatch.

We placed 37 eggs in the incubator on our first Science Saturday. Our second Saturday was held via Google Hangouts and we read a chick book and worked on a few pages from a Chick Hatching booklet I found online. For our third Science Saturday which was day 14 of chick development we candled the eggs to see if they were developing. We took 5 eggs out of the incubator that were not fertilized. The kids really enjoyed seeing the veins through the shells and the chick developing. Day 18 was not on a Saturday but it was the day the eggs needed to be taken out of the egg turner so we held that science lesson via Google Hangouts.

I was a little worried that the eggs might not hatch at all because my incubator is getting a little old and the temperature was fluctuating more than normal. The last two years I have had to turn it up so the interior temperature would remain at 99.5. It was acting the same way except for one day it got really hot inside. I noticed the thermometer was reading about 102 which is almost hot enough to cause chick death. It took awhile for it to level out again and I was worried we would not have any eggs hatch. I re-candled them on day 18 to see if they had developed any since I candled them before. I took 2 out that looked as if they stopped developing but I was hopeful because it looked like more development had taken place. My darling husband said it was because I had “hard boiled” them. 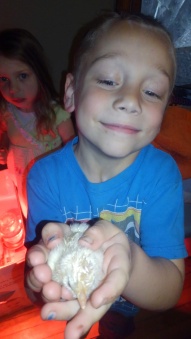 On Friday which was day 20 of chick development we had a sleepover with a few of my nieces and nephews so they could watch the chicks hatch. One chick hatched before they we here and I was thrilled that I hadn’t cooked them. Everyone was super excited to watch the “miracle of life” as my sister said. Everyone was able to watch a chick hatch and to transfer a fluffy chick from the incubator into the brooder box.

Before they left Saturday afternoon 10 chicks had hatched. This morning we have 21 healthy chicks and one more that is struggling to hatch. Percentage wise this may be our best hatch-out yet. 21 chicks out of 30 viable eggs gives me a 70% success rate which I think is pretty good. 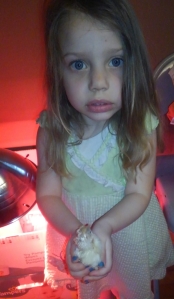 We are helping the last one to hatch by peeling back it’s shell a bit at a time hoping it will pop out soon. Every once in a while we help a late hatcher come out of it’s shell but many times the chick is malformed or will die the next day. I hope it will be healthy so we can add it to the box with it’s siblings.

The kids had fun with this project and I was glad we were able to enjoy it as a family. Although I didn’t actually plan for the chicks to hatch on Easter it is nice to hear Easter chicks peeping in the house.

I hope everyone has a Happy Easter!